Me, my family and community all connect to my American Creed because we are all American citizens. We haven't always lived in Kentucky, we're originally born and raised in Chicago, Illinois. We moved to Kentucky while I was in second grade because my mom finally worked up enough money and found a new job which is at Toyota. She chose to move us because she knew it was best for us and her. Almost every weekend I remember us having to duck down because there was always someone shooting in our neighborhood. A nine year old girl that lived down the street that I seen a few times was shot and killed. Even though we lived close to each other, we still went to different schools because my mom had us go to a better school that we had to walk to everyday in all weather. My mom couldn't take us because she had to be at work every morning and with four kids at the time she did a great job for being a single mom and raising us. My oldest brother, Jermaine, was only 12 walking home from school and seen a man pointing  a gun at another man in the alley. Both my brothers Jermaine and Jemel were always in trouble and getting into fights. And it's not because they were acting out or even wanted to, you pretty much had to. Me and my younger sister, Brianna, once watched a few fights they in because we'd just be walking home from school and boys would run up on them. One time Jermaine was getting jumped by 4 boys and one was hitting him with a pole and I couldn't do anything but watch and I was 7 at the time. I'm not trying to make America seem seem all bad and scary because not all parts of America is like Chicago but Chicago has been getting out of control for years and it's only getting worse. We visit about 7 times a year. We aren't even allowed to go outside or walk to the corner store like we used to because there is sick and crazy people out there. So yes, people say they want the American dream but honestly, it's not always good.

Is America the way it is portrayed? Is freedom used fairly?

My piece is going to be about my dad raising me and my 3 siblings as a single parent.

Under a Flag of 50 Stars

A poem about the qualities that make us American.

A View of America From the Outside

I'm a foreign exchange student from Germany and grew up in a culture different from the American one. While watching the movie "American Creed" I noticed some differences and similarities between those two cultures.

From segregation to melting pot: diversity in America.

My American Creed: Family and Service

It is about how my community, family, and I help the community and how we help others and how I think we can help those who are in need.

This is a picture that describes a large amount of peoples American Creed. This shows a flashback to someone when they were in their home country where they couldn't defend themselves. Then is shows a comparison of their life now that expresses a life they desire and strive for.

What Makes me American

My american creed is that i have freedom,equality, and justice. I'm proud to be an american because people can accept me or others for who i am or others like gender, culture,food,language, Etc without force of others around me.

It's just simply a poem describing what I feel like being an american citizen.

I drew an outline of an American Soldier in honor of the soldiers that fight for our country and I drew all the words that stand out to me when I think of American Creed.

I will be explaining what it means to be an American.

Despite having many responsibilities as the first of his family in the United States, my grandfather was able overcome many obstacles to obtain higher education and have a successful career in the U.S. military.

My photoshop masking image portraits the bald eagle which is the symbol of America.It symbolizes liberty, justice, fraternity, and equality.

The Creed and Dreams of the American People

The analysis of the quote that claims “...Powers are derived from the consent of the governed...” and how it relates to the illusive American Dream that we all share, as well as what it means to me.

What does being a american means to me..

How my family and community connects me to the American Creed

My piece is about how my family and where I live have showed me that the principle of equality plays a big role in America. Everyone is given equal opportunity.

I'll be illustrating my American creed through my dzi dzi (grandpa in Polish) along with inspiring individuals who contributed to the documentary American Creed. My creed is a diamond whose facets are education, nature, and governmental awareness.

What it means to be an American and what rights and privilages you get.

My poem is about how America is full of opportunity and you don’t have to agree with everyone. How you have the same chance to accomplish your dream as everyone else, as long as you put in work. Where you can have your own opinion and practice your own religion. key: opportunity

What our group talked about was what it meant to be an American. We talked about our personal experiences, past history, and we also had to reflect off of what one another said.

Family and an American Identity

An exploration of the relationship between family values and how those values influence who we are as Americans.

To make this paper and further my understanding, I decided to interview my Grandpa to complete this task. 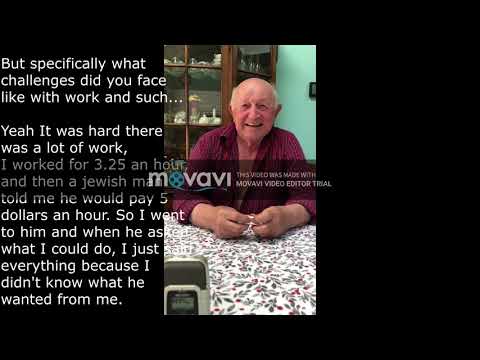 The Story of an Orzeł Biały

My American Creed consists of letting life take its course, working hard, and always staying connected to my roots and my family. In this video all three parts are going to be demonstrated,showing how my american creed ties into my family.